Give the gift of a TrackDaze event! You can now purchase gift certificates. Click here.

Two Years In A Daze

I have to admit it: when I heard the story behind TrackDAZE, I was a bit skeptical. “So, there are these guys, and they were basically an R32 club, and they ran a couple of track days, and they decided to start their own organization devoted to organizing on-track events.” Really? And the name itself – TrackDAZE – seemed a little, shall we say, casual for the very serious business of letting drivers run wild on a road course. Still, they had a weekend scheduled at a course I wanted pretty desperately to try out, so I held my nose, packed my car, and headed to West Virginia to see what these guys were all about.

The first surprise: these guys ran on time. Years of experience with organizations ranging from local circle tracks to an infamous astronaut-esque four-letter club have taught me that nothing really happens on time at a trackday, so you can imagine my surprise when I arrived at Summit Point Raceway five minutes after the published closing time for tech… and saw these guys closing up shop! Worse yet, everybody else had long since teched. Apparently this disturbing punctuality was the rule for TrackDAZE, not the exception. 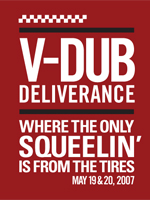 This was my chance to meet Jeremy Jens and Eric Campbell, the founders of TrackDAZE, up close and personal. My first impression of these two turned out to be my permanent one: they were personable, professional, and friendly. Maybe a little too friendly, because if there’s anything else I’ve learned running at racetracks around the country, it’s that somebody needs to lay down the rules and make ‘em stick. Without “that guy”, a lot of metal gets bent, and in a hurry.

“You’re late for your meeting,” Jeremy told me, “so you can park right here and run over.” I barged into the classroom just in time to hear Jon Felton begin his spiel. “Please DO NOT make me angry,” were the first words I heard from this guy. Good advice. Felton’s exactly the kind of fellow whom experienced racers like to see as an event director – and, in fact, he’s served as a group leader for NASA’s National Championships. “We run a time-certain schedule,” was Jon’s next statement, and it’s true. TrackDAZE runs on time. If they promise you four hours of track time, that’s what you get. Jon runs the schedule to the exact minute, he puts the train back on the tracks when mechanical failures or talent shortages black-flag a session, and he commands the deserved respect of everybody at the facility. By the end of my first TrackDAZE weekend, I had plenty of respect for him myself. The combination of Jeremy, Eric, and Jon makes for a well-run event, and I quickly resolved to return as often as possible.

Since that first weekend in 2007 I’ve had the privilege of attending nearly every TrackDAZE weekend, from their early-spring runs at VIR through their first-ever Midwest excursion to Autobahn Country Club, and back to the East Coast for the windup of the 2008 season. 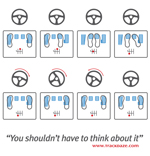 There are a few things that these guys simply do better than the competition. Let’s start with safety. TrackDAZE combines a seasoned group of instructors with clear and simple rules to create safe weekends. In 2008, TrackDAZE events became eligible for trackday insurance from certain providers – an unequivocal vote of confidence in an organization which puts safety first.

The past two years have also seen Jeremy, Eric, and Jon add some impressive players to the roster for purposes of off-track instruction and event coordination. Noted professional race instructor and vintage competitor Peter Krause shared his classroom curriculum with students at the March VIR event, while students at other TrackDAZE events have had the privilege of receiving personal attention from NASA CMC race winner Colin Jevens and Grand-Am official James Packer, as well as group discussions and coaching sessions with a variety of professional racers. Anybody who has ever suffered through the typical marque-club “instruction session” will appreciate the solid, track-specific information these fellows communicate. The on-track instruction is outstanding, too – and I don’t say that just because I happen to be one of the many race-winning track rats TrackDAZE puts in the right seat for their events. The qualification for “instructor” at most car clubs is “willing to instruct”, but at TrackDAZE you might find anybody from SCCA National Champions to Randy Pobst himself sitting next to you – and each one of these guys (and gals) has undergone a personal screening by the occasionally intimidating Mr. Jon Felton, who is a nationally certified instructor himself. It’s common to see novice drivers take ten or twenty seconds off their lap times by the end of a weekend, and even more common to see people smiling under their helmets. 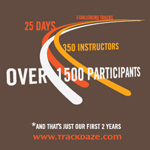 I’d personally be willing to pay more for a TrackDAZE event than for any other organization’s offerings. Of the major players in this business, TrackDAZE offers the most time behind the wheel, some of the best available classroom sessions, and plenty of great benefits to go along with it, including event-specific shirts and the aforementioned “time-certain” schedule. Happily, though, Jeremy and his boys make it pretty cheap to run their events. Their VIR Full Course events in particular are almost outrageously cheap compared to what you’d pay to run with a single-marque club. Their Midwest event at Autobahn was also a hell of deal at a track which is normally tough for “regular guys” to set their wheels on.

What’s ahead for 2009? Look for Jeremy and Eric to offer a full slate of top dates at your favorite East Coast tracks, including the New Jersey Motorsports Park. They’re also planning to return to the Midwest, which is good news for anybody who finds VIR to be a bit of a drive. If you haven’t given TrackDAZE a shot yet, don’t miss the chance this year. Sure, it’s my opinion that TrackDAZE is rapidly becoming the best small-club on-track program in the country, but don’t take my word for it. Put on your helmet and try it yourself. See you out there!

TrackDaze puts on some of the safest and most professional track events I attend, but always manages to keep the fun factor alive at the same time.